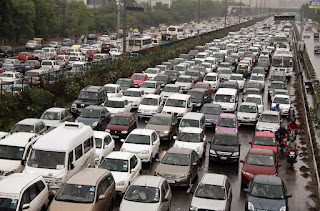 AP Photo
India power blackout leaves 670 million without electricity | News | National Post: "Roads are gridlocked, coal miners are trapped underground, hospitals have been plunged into darkness and millions of  train travellers are stranded after grids supplying electricity to half of India’s 1.2 billion people collapsed on Tuesday in the second major blackout in as many days.

Stretching from Assam, near China, to the Himalayas and the northwestern deserts of Rajasthan, the outage was the worst to hit India in more than a decade and embarrassed the government, which has failed to build up enough power capacity to meet soaring demand.

“Even before we could figure out the reason for yesterday’s failure, we had more grid failures today,” said R. N. Nayak, chairman of the state-run Power Grid Corporation."