Can Metropolitan Transport Corporation buses be made completely free for everyone to use? The idea might sound utopian, but experts point out that there is sound logic behind offering free public transit."
at 7:15 AM No comments:

AP – An Indian man takes a nap in the sun as pigeons fly around him on a cold day in New Delhi, India, Friday, …
Cold weather kills more in northern India - Yahoo! News: "LUCKNOW, India – Near-freezing temperatures have killed more than two dozen people in northern India in recent days despite government efforts to distribute blankets and medicine to the poor, an official and a news report said.
In worst-hit Uttar Pradesh state, at least 22 people — many of them homeless — died over the past three days, pushing the death toll from two weeks of cold weather to 63, Ram Mohan Srivastav, a top government official, said Saturday."
at 12:54 PM No comments: 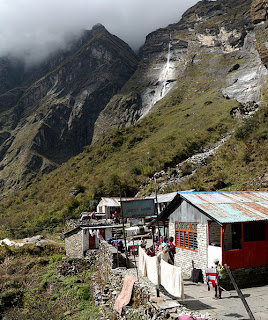 Nepal Has 11 Hour Blackouts as Climate Change Dries up its Rivers – CleanTechnica: Cleantech innovation news and views: "The state-run Nepal Electricity Authority has had to cut power for 11 hours a day beginning this week, because river water levels have dropped dramatically, according to AllHeadlineNews.

With its steep terrain topped by glaciers, Nepal has the greatest hydro power potential in the world, at 84,000 megawatts. To date, only a small portion of that has been developed, 600 megawatts – enough to serve a small population who live a much less energy-intensive life than people in the US.

But, with warming, over the last few years, Nepal’s glaciers have already been retreating."
at 11:51 AM No comments: 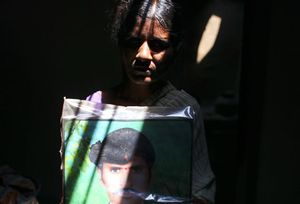 ABBIE TRAYLOR-SMITH
Sugali Nagamma holds a portrait of her husband,
who killed himself by swallowing pesticide in front of her
India's hidden climate change catastrophe - Climate Change, Environment - The Independent: "Naryamaswamy Naik went to the cupboard and took out a tin of pesticide. Then he stood before his wife and children and drank it. 'I don't know how much he had borrowed. I asked him, but he wouldn't say,' Sugali Nagamma said, her tiny grandson playing at her feet. 'I'd tell him: don't worry, we can sell the salt from our table.'
Ms Nagamma, 41, showed us a picture of her husband – good-looking with an Elvis-style hairdo – on the day they married a quarter of a century ago. 'He'd been unhappy for a month, but that day he was in a heavy depression. I tried to take the tin away from him but I couldn't. He died in front of us. The head of the family died in front of his wife and children – can you imagine?'"
at 1:21 AM No comments: