Four major benefits of #publictransit -- or IOW, negatives of cars

Stay Active
Public transport users get more physical activity per day than those who use private vehicles, reported a study by Moriguchi City Health Examination Center, Japan, this November. The center interviewed 6,000 adults in Osaka, Japan, comparing bus and train commuters with those who drove.
Adjusting factors like age, gender, smoking, etc, the study found that compared to those who drove to work, people who took the bus or train were 44% less likely to be overweight; 27% less likely to have high blood pressure; and 34% less likely to have diabetes.

Cut Stress
The Marchetti’s constant, developed by Italian physicist Cesare Marchetti, states that anything beyond a 60-minute commute stresses one out. Delhi drivers have long crossed that limit. The waiting time at traffic signals is becoming longer. According to IBM’s 2011 Commuter Pain Index, 70% of the respondents in Delhi said traffic increased their stress levels, upped their anger, and negatively affected their performance at work or school.
There is the added strain of finding space to park. Once parked, one worries for the safety of the vehicle. A Centre for Science and Environment report states that in some locations in Delhi, as much as 45% of the circulation area is under parking encroachment. Yet, parking is a mad scramble. This year, a vehicle was stolen every 15 minutes in Delhi. Police blame acute shortage of safe parking space as the main reason behind these crimes.

Boost Economy
In their paper, Transit Service, Physical Agglomeration and Productivity in US Metropolitan Areas, researchers Daniel Chatman and Robert Noland said that the economic value of mass transit could be worth anywhere from $1.5 million to $1.8 billion a year, depending on the size of the city. Every time a metro area added about four seats to trains and buses per 1,000 residents, the central city ended up with 320 more employees per square mile — an increase of 19%, Chatman told the CityLab of the Atlantic.

Find Time
Riding public transportation also gives people time to do things they couldn’t (legally) do while driving. Bus and Metro travellers can talk on the phone, send text messages, work, read, and listen to music while commuting. Or just take a power nap.
Ultimately, public transport is of little use if the commuters can’t time their journey. In Delhi, we not only need a reliable network but also real-time information at bus stops and Metro stations and through websites and phone apps for those on the go. There is no reason why “sarkari” can’t be smart, or why we can’t make a lifestyle choice for a greener, faster and healthier Delhi."
at 2:38 PM No comments:

NDTV : "The exercise aimed at encouraging people to use public transport in order to control air pollution saw participation of thousands of people, including schoolchildren and women. A cycle rally as part of the initiative was organised on the route from Laxmi Nagar Metro station to Poorva Sanskritik Kendra via Karkari Modh bridge starting at 8 am.

Deputy Chief Minister Manish Sisodia, who attended the event, rode on a bicycle and appealed to the people to take to bicycle-riding as a way of ensuring the success of the odd-even number scheme.

"As pollution is increasing in Delhi, people should opt for public transport. I appeal to the people of Delhi to make the odd-even number scheme a success," said Mr Sisodia, who also relaunched the Poocho app ahead of the launch of the odd-even scheme on January 1.

Mr Sisodia said that people can call the number 9311900800 for any queries related to the functioning of the app."
at 3:17 AM No comments: 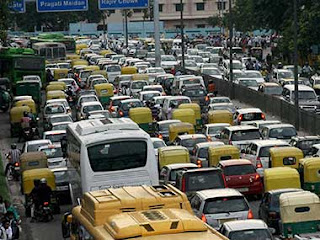 Times of India: ""The Delhi pilot cannot be replicated in Mumbai unless the public transport system is strengthened. It is so tragic that we are simply ignoring the BEST, which is the lifeline of Mumbai. The state and civic authorities should support fund the bus undertaking and ensure there are 1,000 air-conditioned buses on roads, which ply on dedicated lanes across the city. This could be a game changer," said transport expert Rishi Aggarwal. "Once you give citizens the option of a strong public transport to go to work, you can then dissuade car owners to stay off roads." "
at 9:37 PM No comments:

The Hindu: "In spite of the survey which concluded that the Capital needed a fleet of at least 10,000 buses – a demand for the fulfilment of which no manufacturers are currently willing to step forward -- the fleet of the DTC registered a marginal increase as the number of buses went from around 3150 buses to just 4705 between October 2010 and October 2015 even as an increase in daily ridership from 22 lakh to 39 lakh during the same period."
at 12:34 PM No comments:

Why do we wait until #climate disaster to make public transport fare-free? #chennaifloods 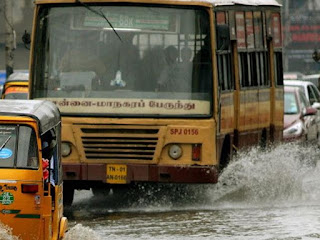 The Hindu: "Considering the number of displaced people in the city, the government has announced that passengers can travel in MTC buses free of cost for four days, beginning Saturday (December 5)."
at 12:26 PM No comments:

The Economic Times: "NEW DELHI: The Arvind Kejriwal-led Delhi government announced a radical move to clear the air in one of the world's most polluted cities by restricting the number of cars on roads from January 1, the first time an Indian city will attempt such a move. It will do so by allowing cars with odd and even licence plates to run on alternate days. "
at 4:50 AM No comments: