The Times of India: "According to Arora, the aim is to encourage office-goers to switch to public transport. The locations chosen in the city for the drive will include Cyber City and Cyber Park. If the drive turns out to be successful, car-free day will be observed every Thursday as in Hyderabad, Arora said.
"
at 7:45 AM No comments: 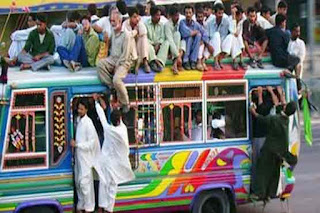 About 42 percent population, comprising of 84 lac people, depends on public transport but the total number of buses running in the metropolis is 6000 giving space to only 5 lac people while the rest of 79 lac people face difficulties while travelling."
at 8:34 PM No comments:

With no public transport, over 10 lakh pvt vehicles on Jalandhar roads

tribuneindia : "With no public transport available in the city, the traffic infrastructure has taken a toll by around 10 lakh private vehicles on the city roads every day.
Though with Jalandhar getting the cleanest city tag in the state, city residents too have raised their aspirations from the district administration and have now demanded a public friendly transportation system in the city."
at 5:53 AM No comments:

hindustantimes : "Roads in south Delhi’s prominent Alaknanda locality carry three times more traffic than its original capacity while on-street parking in Chittaranjan Park is 3.15 times more than the designated space.
....the government should work towards strengthening the public transport system in the city. In Singapore, for example, people pay twice the cost of a new vehicle as taxes to the government. This becomes a deterrent for people to travel by personal vehicles."
at 11:14 AM No comments:

The Times of India: ""As far as Aurangabad is concerned, public transport is nobody's child. Bestowing the city with an efficient public transport does not figure on the agenda of the politicians concerned. The civic administration too is least bothered about the issue," she said.

Times of India: "Incidentally, among the list of problems faced by the city, traffic and road safety problem was top on the list as per suggestions received from citizens. Pedestrians First said focus should be on public transport.

"For maximum cost effective use of available scant resources (money and road space), there should be a 'policy for topmost priority to public transport' aimed at reducing use of private motorized vehicles which is the root cause of traffic problem. All possible steps should be taken by PMC to support and strengthen city public transport. A senior officer should be nominated to coordinate with PMPML and traffic police, Pedestrians First said.
"
at 7:39 PM No comments: