By Vidyadhar Date: "The programme sponsored by the urban development ministry is well-intended. But look at the policies followed elsewhere and in reality. While one arm of the government seeks to promote public transport, another arm, Akashvani, is promoting the motor car. And shamefully this is being done through a programme sponsored by a motor car company called DSK Toyota. This programme in the morning prime time on the Mumbai B station glamorises, idolizes the motor car. So even a public service broadcasting utility with a fine tradition is being subverted from within and is promoting vested interests.

And did we not hear during the Delhi assembly poll campaign how Mrs Sheela Dixit, the then Congress chief minister, openly talked of building more double decker flyovers. And in one nauseatingly repeated and idiotic Bharat Nirman advertisement the flyover is touted as a symbol of progress."
at 11:10 AM No comments:

Bangalore not safe for walking

The Times of India: "BANGALORE: Pedestrians are nothing short of sitting ducks for speeding and wayward motorists in Bangalore city. Unsafe pavements force pedestrians on to the road, where they risk life and limb; little wonder, Bangalore stands low on the Walkability Index (WI), an indicator of how walker-friendly a city is. "
at 7:37 PM No comments:

Campaign to promote walking, cycling, bus ride - Free Press Journal: "In India around 140,000 people die in road accidents each year. Vehicles are also the biggest polluter as they contribute around 70 per cent of air pollution in the country.

The National Urban Transport Policy has advocated for giving priority to non-motorised forms of transport. 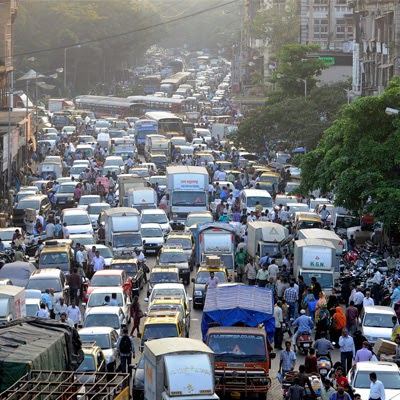 DNAIndia.com: "Public transit is a natural outlet for decongestion"...
at 3:13 PM No comments:

Affordable transport should be a fundamental right, says forum: News Desk - Citizen Matters, Bangalore News: "If a garment worker or a pourakarmika, who earns Rs. 5,000 a month, buys a monthly pass for Rs. 725 (Rs. 925 for red board buses), she shells out 15-20% of her income just for commuting, which increases if more people in the family use the bus. Many people are now cutting their health and education expenses to be able to commute in the city. In fact, from February 2nd, fares for non air-conditioned buses have been hiked by Re. 1 for the 2nd Stage, citing rising diesel prices."
at 8:06 PM No comments:

DM chief calls for curb on vehicles on UAE roads

Khaleej Times: "Our streets are getting jammed and it affects the daily life... the health of the people and the environment,” he said.

...He said the way forward was to use public transport system, especially the Metro. “I am sure the RTA (Roads and Transport Authority) is building Metro in different stages and will open many more stations covering more areas and increasing the capacity,” he said, replying to a query on the jam-packed trains during the peak hours."
at 4:47 AM No comments: