Goa, India, the way to fewer cars is via public transport

Times of India: "Sharing her thoughts about the construction of new bridges in Goa, she said, "The government feels it is inevitable that the vehicle numbers will grow and we will need more space. This is not sustainable. Beyond a point, Goa cannot find enough road space to accommodate higher car density. If they make infrastructure for public transport, there will be no need for flyovers in the future.""
at 4:22 AM No comments:

Pune Mayor plans to make #publictransport cheaper than a two-wheeler

Times of India: ""Good public transport is needed. People are not opting for it (public transport) because they don't have any guarantee about the service. The elected members of my party and also other parties will work to change this. More buses will be made available for the city so that the frequency of buses will increase," Pune mayor Prashant Jagtap said. He added that steps would be taken to ensure the per kilometre expense of using public transport becomes cheaper than that of two-wheeler."
at 6:06 AM No comments: 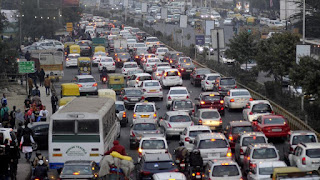 Hindustan Times: "On December 15, HT wrote about a study by six road design experts stating that the time spent by Delhi commuters on city roads has doubled in the last six years and the speed of traffic during peak hours has been cut by half. Today, a person travelling 40 km by a private vehicle during peak hours spends an average of 3.43 hours on the road, up from 1.36 hours in 2011, the researchers found.

This ocean of vehicles hasn’t just choked the roads. It is asphyxiating the national capital. In 2015, as many as 6,502 persons died of respiratory diseases, the second biggest cause of death after the unspecified “others” category in government records."
at 5:28 PM No comments: