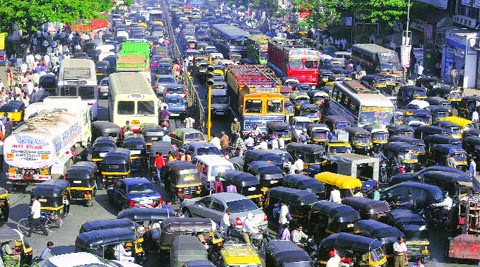 The Indian Express: "With capacity to accommodate parking for barely 15 per cent of the number of four-wheelers registered in the city, illegal parking on footpaths and roads have led to deaths of pedestrians and disrupted traffic movements in the city. Parking problems, identified as a prime concern by the Mumbai traffic police, are set to worsen over the next two years if unchecked."
at 5:10 AM No comments:

...It is thus the global capitalist system that is responsible for the global ecological crisis. It is the ruling capitalist classes – who control the levers of power in the developed and underdeveloped countries and who for

their profiteering are interested in maintaining this system – who are preventing humanity from making the bold decisions needed to tackle this crisis.

This can be easily understood with the help of an example. The transport sector is the biggest user of fossil fuels in the global economy. In order then to drastically reduce the global consumption of fossil fuels,

the transport sector will have to be severely downsized. This means reorienting the way the global economy runs today: it would mean replacing private vehicles with public transport and promoting use of cycles for

short distances – but these measures would severely affect the profitability of the car and truck manufacturing companies as well as the oil companies; it would also mean decentralizing production to reduce

transport of raw materials and finished products over long distances – but the giant multinational corporations who dominate the global economy today believe in hugely centralizing production to reduce costs...

read more here: http://lokayat.org.in/content/english-booklets/Crisis-of-Global-Warming-second-edition-2011.pdf
at 7:50 AM No comments:

Are we doers or chokers? Capital’s air quality hinges on the answer - Hindustan Times: "The government has to provide decent travel alternatives and then take tough measures. The 12-year-old Delhi Metro ferries 2.5 million passengers daily. Yet at least 700 new cars hit Delhi’s roads every day. Clearly, not many of those who can afford to buy cars are using the Metro."
at 3:50 AM No comments:

Cars vs. Buses: Do we have a choice any longer?

Lokayat : "If governments can spend billions of dollars bailing out corporations, they can surely spend a few million dollars on taking steps to drastically reduce the number of private vehicles on the roads, as that would sharply reduce global warming which is pushing the world towards catastrophic conditions. In fact, the need of the hour is to make public transport entirely free. The benefits are huge. Leave aside the consequent drastic improvement in quality of life due to improved air quality, no congestion, huge open spaces even in cities which can then be converted into gardens, peace of mind due to drastic reduction in risk of accidents, all of which cannot be measured in monetary terms; for a country like India, this is also a very viable proposition commercially. For, the foreign exchange savings, savings in oil consumption, and savings in medical bills from improved air quality and reduced accidents will be far more than the cost of providing this free transport. "
at 10:46 PM No comments: 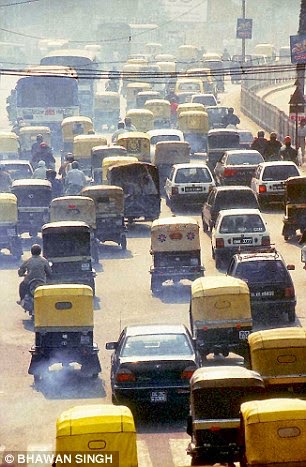 Mail Online : "From an environmental standpoint they are a disaster. Controls over urban layouts, building heights, movement within the city, markets and production of goods – they need to be reassessed.

Should people be fined for commuting long distances in the city and adding to pollution? Should the municipality collect a tax from cars parked on public land at night? Shouldn't city residents who own no vehicles be allowed to travel free in public transport? The answers may generate new urbanity.

Certainly, expansion of towns like Bangalore and Lucknow, the new towns planned in the industrial corridor between Delhi and Mumbai, unless built to new standards of environmental design, will further squalor and decay. "
at 5:17 AM No comments: